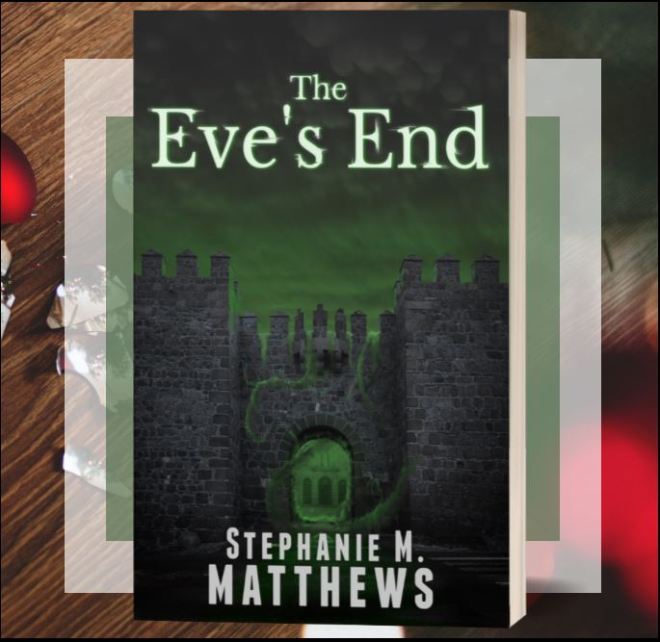 I think the one day that is almost just as exciting as Release Day is Cover Reveal Day! Everything starts to become that much more real, and I’m pretty proud about how my cover turned out!

There is an ominous dread hanging over the village walls–literally! On Christmas Eve when the Gift and Nefas take over the little village, one thing has always been very clear: the village walls are a containment boundary. But this year it looks like that rule is being pushed to its limits…!

“The Eve’s End” is the stunning sequel to the breakout thriller “The Gift”. Re-immerse yourself in the vivid writing style, provoking storytelling, and addictive suspense that made you love the first novel!

Fae has found a successful life for herself, rising to the top of her field as a highly sought after architect; she has a healthy family, home, and future. But she carries with her the secret of a traumatic past no one can understand: the Gift, and Nefas. She fears her past because it could still become her future. . . because Nefas hasn’t stopped haunting her. What does it take to get your life back from someone who stole it from you? Everything.

A mysterious mandate brings Fae back to the Belgian village for Christmas where it all began. It’s a place she swore she’d never return to, but she determines to find reprieve from what—and who—still haunts her. Unsettling events, however, shatter her plans for finding peace.

The ghost of a teenager, who legend said Nefas had killed years earlier, is seen wandering the streets. A young woman who has interests beyond the Christmas festivities knows more than she should, and she seems to have awoken the Gift in a way it hasn’t been since Fae had twenty-eight years earlier. Even many of the local villagers have become ignorant of Nefas’ darkness.

Faced once more with Nefas’ inevitable call, Fae will be forced to discover the courage to exorcise her past once and for all by surviving one more Christmas Eve with the Gift and with Nefas. He has had twenty-eight years to make sure Fae doesn’t escape him again, and his ambitions have grown beyond the village walls.

“The Eve’s End” releases on November 17th. Find at your favourite online retailer.

Last night I crawled into my bed with fresh, clean, crisp sheets and it's like a small revelation every time how great fresh, clean sheets feel. There's just something about them. 😌 What's the amazing feeling you love? It's coming on sweater season, is that your go-to comfort feel?
Throwback Tuesday...because #tbt still works. From the archives discovered when I was transferring my old laptop files to my new laptop. The original was a bit longer and disjointed, but I liked a couple of the lines so I re-edited it to this. Its flow of ideas is still a bit disjointed, and still bears the weight of a slightly melodramatic young adult disappointedly discovering the realities of the world, I can't even really remember what I was talking about. Anyway, I hope you can find a line or two that you like!
The people of the village who play unfortunate host to the Gift have always wanted to keep themselves locked away from the world around them: it's for everyone's best interest. Long, long ago the villagers built a large wall around their village to keep outsiders out. They also built an impressive little basilica (well, tiny by comparison to most) to counter the hell brought by the Gift. But now with the world as modern as it is, no longer is the Gift safe behind just some walls. They need to hide it. It's how "The Eve's End" really gets started ...
Finish the sentence: "You and me and...?"
I love when readers send me pictures of them reading my stories! A huge thanks to Michelle Seymour for this picture of her reading "The Gift" on a South Carolina beach!
It's one thing to face your fears. It's another thing when your fear is waiting for you.

If the thrill of Ted Dekker’s writing gets you excited, and you love novels that push the boundaries, then “The Gift” is your story of choice. Edited by Stephen Parolini who has worked on many of New York Times bestseller Tosca Lee’s gripping novels, “The Gift” is an unpredictable Christmas adventure telling a story that holds nothing back.